Reading Time: 4min read
A A

With more and more options available for growers to monitor their crops and the environment around them it can sometimes be difficult to know which factors to prioritise and which measurements can best inform management decision making, reports Richard Crowhurst.

A recent webinar saw technology providers 30MHz and sensor manufacturer Sendot team up to discuss the advantages of measuring and monitoring a number of variables, including oxygen levels in substrates and photosynthesis efficiency in greenhouse environments. 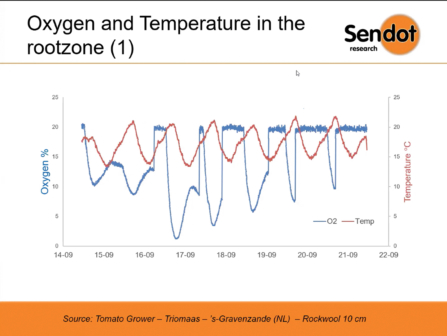 Event host Mirjam Bekker of 30MHz explained that Sendot has a unique portfolio of optical sensors including oxygen and photosynthesis efficiency sensors and that it is therefore logical for the two companies to collaborate. “Sendot sensors are in addition to what’s available in the market for horticulture,” she said. “Combining data from your climate computer with, in this case, Sendot sensors, allows you to take the next step in data interpretation and to obtain new insights.”

Aryan Aziezie of Sendot explained that the company currently produces three commercially available sensors: a combined oxygen & temperature specifically developed for substrates, photosynthesis efficiency, and chlorophyll fluorescence, while a fourth for pH measurement in substrates is currently at the prototype stage. “We know from scientific literature that a temperature increase in the substrate has a positive effect on photosynthesis,” he pointed out. “Our chlorophyll florescence sensor is primarily developed for seed companies to help determine the optimum harvesting of seeds or fruits, but it is quite interesting for companies that want to know the optimum harvesting periods in a season.

“At the moment pH is measured in the drain, which is an after-measurement. As a company we try to encourage growers to measure where the action is happening at the root zone.” This is something the new pH sensor is designed to provide and is also how the combined temperature and oxygen sensor is designed to be used.

The 30MHz dashboard allows a number of factors to monitored, including PAR radiation and photosynthesis efficiency (top right).

While the visual appearance of roots can provide some indication of the conditions which they may previously have been exposed to – brown roots can sometimes indicate a lack of oxygen – until recently there had been no reliable method to accurately measure oxygen levels in the root zone. Aryan added that low oxygen levels (below 10 per cent) can be associated with lower root activity and lower nutrient uptake, as well as higher incidences of pathogens such as Pythium and Fusarium. Giving too much water can reduce the availability of oxygen and effectively suffocate the roots, and measuring oxygen using a sensor can help with efficient irrigation scheduling.

“We have seen that adding 25-30 mg or additional oxygen to your irrigation water can give up to 14 per cent more production,” he added. “We also know that the drier a substrate is, the better it is for controlling Pythium.” He continued that sensors to measure both water content and oxygen in the substrate are important, it is not a straight choice between one and the other. “We should give enough water to the substrate, so it is saturated, but not too much in case we suffocate the roots.” 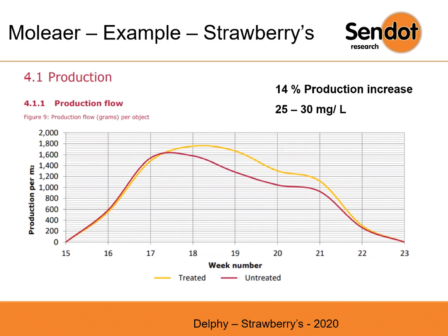 Photosynthesis measurement is based on measuring the chlorophyll fluorescence in the leaf. “It is important to always attach our sensors to the top leaves, or at least to the leaves that light hits first,” he explained. “We know from practical research that 65 per cent of photosynthesis actually happens in the top 50 cm of the crop in proportion to the rest of the plant.

“We know that the more light you give a plant, the more it will react, so there is an inverse correlation between the amount of light (the PAR) and the photosynthesis efficiency (how much light is being converted). Normally plants show around 80 per cent photosynthesis [efficiency] in the night, and the ability to recover to 80 per cent after a normal day shows your plant is healthy. If it is not reaching 80 per cent after a production day something has gone wrong.”

He said that providing too much light during the day can lead to photosynthesis efficiencies below 30 per cent, at which levels the plant is stressed: “If you are not measuring that, you don’t know when your plant is in stress and determining the stress levels of your plants during a week is really important.” Using the photosynthesis sensor growers can determine how far to push light levels while maintaining maximum performance and production from the crop. Taking measurements over a period, such as a week, allows growers to start to see patterns and adjust management decisions accordingly.

“It is really essential, and you would like to have an optimum light recipe,” Aryan suggested. “You can scale down the amount of light you are providing, or if you are not seeing any stress, then you can even push your plants further.” In CAM pathway plants, such as orchids, the relationship between light and stress is even more apparent than for C3 plants.

“It is important to understand that our sensor is measuring a relative amount, a percentage, rather than an absolute number, so the trend is more important than the absolute outcome of the measurement.” He also stressed that there is a relationship between photosynthesis and dry matter. “We’ve developed a model which can help you determine the optimum amount of efficiency of light captured by a plant,” he added. “We do this by measuring the ETR: the electron transfer rate. When we analysis the statistics we see that the cumulative amount of light during the day is an important value because every crop has a very different profile, but you can determine the optimum for your plant. According to Aryan using the photosynthesis sensor as a tool to influence your climate is one of the best ways to increase efficiency and crop production due to the direct relationship between PAR radiation and photosynthesis efficiency. However, as with any growing system, the influence of other factors including water availability, humidity and temperature will also need to be considered and factored into the overall environmental settings used. 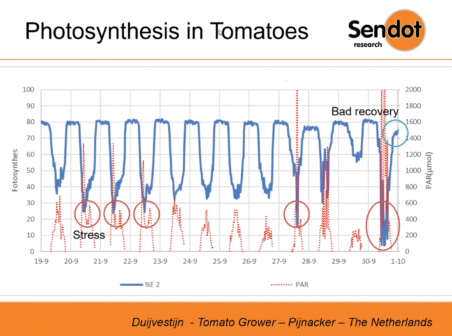 High levels of PAR radiation (above 700 µmol) lead to plant stress and photosynthesis efficiency levels below 30% in tomatoes.

The importance of a well-maintained climate (energy) screen

Load More
Search
Sign up to our newsletter
@ACTHortNews

Any cookies that may not be particularly necessary for the website to function and is used specifically to collect user personal data via analytics, ads, other embedded contents are termed as non-necessary cookies. It is mandatory to procure user consent prior to running these cookies on your website.