Apple harvest latest to be hit by heat wave

Reading Time: 2 mins read
A A

Britain’s largest apple and pear growers are warning of a lower than anticipated yield for the 2018 harvest, because the June drop has been much higher than expected. This has been caused by cold weather across the South East at the end of March. June drop occurs eight weeks after flowering and will continue into July. Young fruitlets are shed naturally by the trees due to issues such as poor pollination or, in this instance, poor weather conditions after flowering began. Hand thinning would normally then take place, but this year it is being held back to prevent too many fruits being removed. 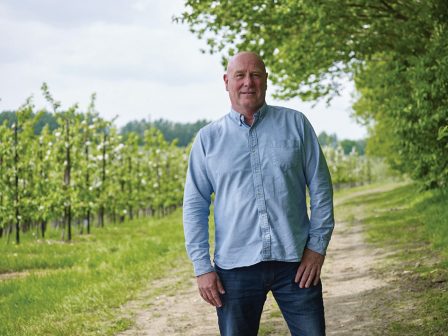 Nigel Stewart, Technical Director at A.C. Goatham & Son comments: “This is incredibly frustrating after what promised to be a perfect start to the season. The prolonged cold and cloudy weather that was experienced in many parts of the South East during the early spring is the cause of this excessive June drop. The ground was simply too cold once the blossom began to flower and the trees were not ready to support a full crop. We had anticipated an increase in the number of apples that we would grow this year, due to our major programme of orchard planting. It is hoped that our harvest will be of a similar size to the 2017 season, but we are still evaluating the crop and it could be lower.

“If everything continues as planned, this will mean a shorter British apple season in store, with supplies likely to run out several weeks before the industry would have hoped. This is, of course, dependent on there being no further issues with the crop. We are now nervously watching the weather, to see if there is a break in the hot spell, which may trigger storms, where hail could also have a devastating effect.”

Other major growers have suffered similar issues. Fellow Kent grower Paul Mansfield, with orchards across mid and East Kent, has seen a similar level of June drop across his orchards and comments: “The level of drop has also been higher than expected across our apple orchards. British growers like myself and A.C. Goatham & Son have both been investing in major new orchard plantings over the last several years and we would have expected to achieve much greater potential this year. Unfortunately, we just can’t control the weather, and for a second year it has played a significant role in the volume of quality British apples available.”

Consultation opens to address skills needs for the agri-food sector